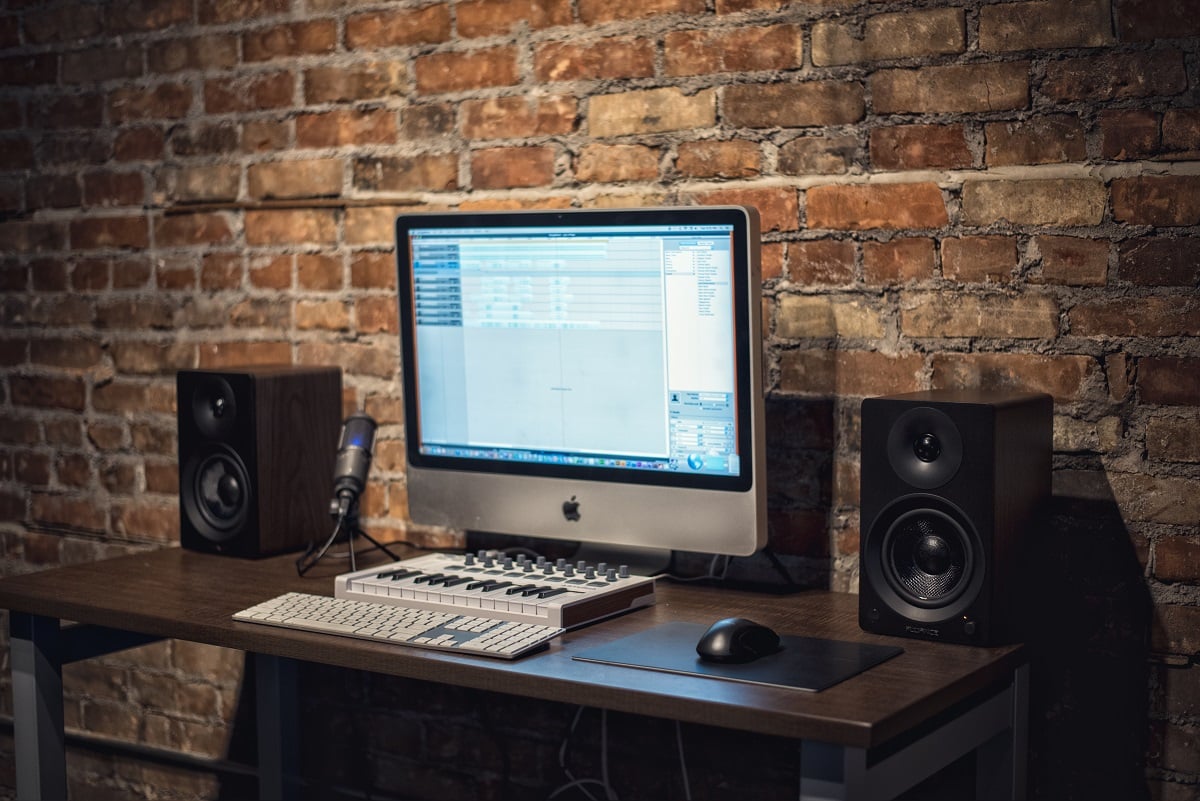 Whether you’re an existing or budding audio professional or simply want to get a good music system, it’s important to know the differences in your speaker options when deciding what is best for your needs. Today’s recording professionals may opt for dedicated monitor speakers when crafting high-quality studio beats, but a home stereo speaker set may have unique features that are desired for casual listening.

What is the Difference Between Powered Speakers and Studio Monitors?

The main difference between powered bookshelf speakers and studio monitors is primarily the sound profile of the audio produced. Studio monitors are intended to produce a flat frequency response to playback the audio recording exactly as intended without any kind of coloration to the sound. This is often required in professional environments related to audio recording and mixing to ensure the speakers themselves are not influencing how the audio professional may edit the music or sound.

These differences aren’t apparent visually, which can make the purchase decision difficult. You should consider the purpose or usage of the speakers you are purchasing before you choose either option as one may be more desirable for your specific application.

One other question that is often asked in the same realm of this topic is what the difference is between active and passive speakers. You can read more about that here.

While powered speakers are designed to project sounds throughout a room, studio monitors have been crafted with short distances in mind. Powered speakers may be useful for a living room, den or outside area, studio monitors are great for bedrooms, studios and smaller areas—as they prevent these rooms from enhancing, or reducing, each sound’s true frequency.

Where sound is considered, there are several differences between powered speakers and studio monitors. Modern manufacturers spend a lot of time designing the perfect speakers—speakers which can enhance a sound’s quality while enriching it with middle frequencies, high frequencies and rich bass.
Studio monitors, meanwhile, prioritize flat-response. They don’t enhance the system’s sound. Instead, they aim to maintain a sound’s ‘true’ frequencies. While this may sound like a drawback, it’s useful for those who want to maintain a song’s true frequencies, base and overall sound.

Powered speakers, while capable of reaching such large areas, aren’t as robust as monitors. While they can project high-quality music, they may lose the above-mentioned ‘true’ sound of a song. Powered speakers, for this reason, make excellent home theater installations.

Studio monitors are consistent, featuring a natural playback of most recorded material. Some studio monitors may not introduce extra color to sound, but they accurately reproduce sounds being played before an environment. For this reason, studio monitors are great for critical listening, recording, radio studios and even television. Studio monitors are also the best option for mixing, editing and mastering audio to a professional degree.

Because studio monitors tend to be geared towards professionals, they may not be accessible to regular music-lovers. This drawback is perpetuated by the sheer diversity of studio monitors: While powered speakers have clear-cut differences in terms of features, studio monitors are defined by their pro-level intricacies.

Studio monitors also can’t reach large audiences. They’re not only good for small studio environments–they’re made for them. Studio monitors, in general, don’t feature as many amplification options as powered speakers. Music-lovers wanting to alter their system’s sound may want to pick powered speakers, instead. 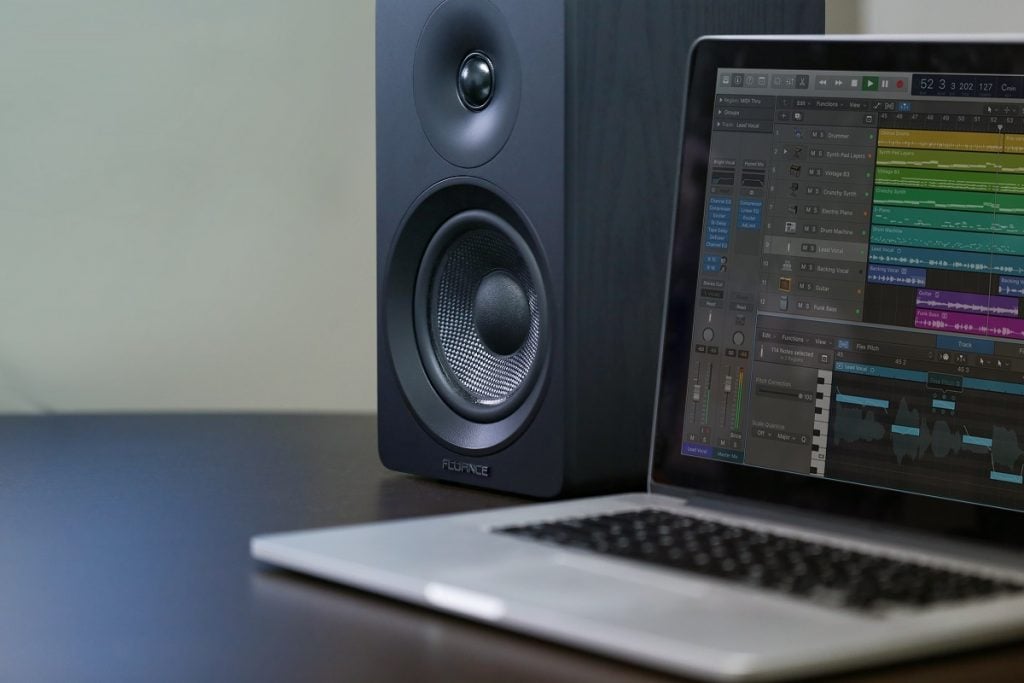 Both powered speakers and studio monitors are great! Neither is better, but your personal taste, music needs and listening area should still be considered when choosing which option to go with.

If you want to have sound options, or have speakers that have been enhanced for music listening and enjoyment while also wanting a room filling sound powered speakers make for a great choice. The other thing to consider is the level of sound production that you would do. Plenty of more enthusiast-level audio creators can utilize a standard pair of powered speakers. Content creators, video editors, etc can easily use powered speakers to fulfill their needs as certain levels of audio production doesn’t require as intense of scrutiny.

If you’d like to get started with pro-level sound engineering, or if you want to create a high-quality sound space—like a music studio—then you may want to choose the studio monitor. At the end of the day, the choice is yours. At Fluance we focus on home audio rather than professional audio and offer a few powered speaker options . If you’d like more information, feel free to explore our line of powered speakers. 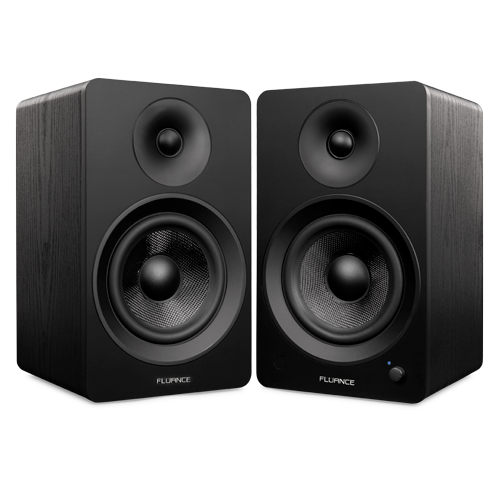 Level-up any sound system in your home by easily pairing to your turntable, TV, computer, or Bluetooth speakers to experience an unparalleled sound performance.

What is 180 Gram Vinyl, and Is It Better?
How to Set the Phase and Crossover Frequency on Your Subwoofer
What is the Difference between a LP and EP?
Home Theater Speaker Wiring Tips, Diagram and Guide for 5.1 or 7.1 Hom...
Direct Drive vs Belt Drive Turntable- Which is Better For Turntables?
5.1 & 7.1 Surround Sound Speaker System Setup & Placement Gu...